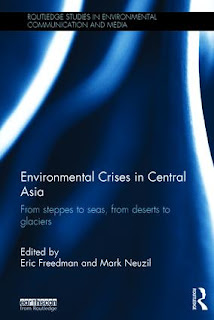 Environmental Crises in Central Asia: From Steppes to Seas, from Deserts to Glaciers has just been published by Routledge as part of its Studies in Environmental Communication and Media series.

The editors are Professor Eric Freedman, the Knight Chair in Environmental Journalism at Michigan State University, U.S., and Professor Mark Neuzil of the Department of Communication and Journalism at the University of St. Thomas in Minnesota, U.S.

The multidisciplinary book explores an array of environmental challenges in a strategically crucial part of the globe, including the impact of climate change on glacial melt, desertification, deforestation, destruction of biodiversity, hazardous wastes, water quality and supply, energy exploration, air and pesticide pollution, and environmental diseases.

Those challenges cross national borders and may affect economic, political and cultural relationships on a vast geographic scale at a time when the region’s governments are burdened by limited economic resources, weak civil society institutions and political authoritarianism.

The book emphasizes the reality that environmental conditions don’t exist in a vacuum. They’re influenced by science, politics, history, public policy, culture, economics, public attitudes and competing priorities, as well as past human decisions. In the case of Central Asia, such Soviet-era decisions include irrigation systems and physical infrastructure that are now crumbling, mine tailings that leach pollutants into soil and groundwater, and abandoned factories that are physically decrepit and contaminated with toxic chemicals.

Thus it draws on research in the social sciences, natural sciences, media studies and health by scholars and practitioners in Central Asia, Europe and the United States.
Posted by Russian Environmental History Network at 12:10 No comments:

Essays and photos from Lake Baikal

The Network fieldtrip to Lake Baikal took place on 25 July – 4 August 2015. The group met in Ulan-Ude and visited various places on and around the lake including the Barguzin Nature Reserve (Russia’s first Zapovednik), the Ushkanyi Islands (home to the nerpa – the endemic  Baikal ringed seals Pusa sibirica), Olkhon island (with its important Buriat sites), finishing up in Irkutsk. Several workshops were held and local experts were involved.

Visit the Baikal page of our website for a full itinerary, reflective essays from participants, photos and more.
Posted by Russian Environmental History Network at 08:39 No comments:

The Network is organising a joint conference together with the National Research University Higher School of Economics, St. Petersburg, on 26-28 November 2015, entitled:

Natural Resources, Landscapes and Climate in Russia and Neighbouring Countries

View the Conference programme
Posted by Russian Environmental History Network at 08:38 No comments:

A report (English translation) and accompanying documents (in Russian) are now available from the following recent conference:


The Environmental History of Northern Siberia: Future Directions of Research 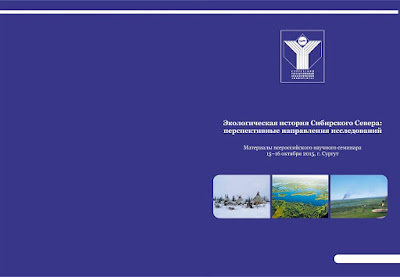 Posted by Russian Environmental History Network at 15:02 No comments: